They’ve got me through so many times in my life

Times when I felt like an alien abroad and

Times when I felt I was being ignored and

Times when I knew I was so self absorbed and

Times that will come back again I am sure

Sometimes you feel so unique 'cause no one else feels like you do, but

So thanks to the spirits who channelled those words

To all the souls in these vessels on earth

I’m sure we all get the message deserved

so I hope I can take all my books

To my next rebirth...

The Story of 'Books' 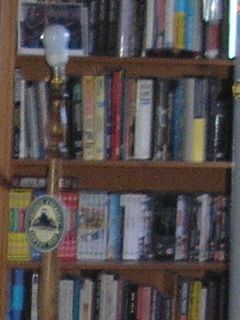 Sometimes in my life I have found myself to be a bit depressed or restless, feeling like something's missing or that I'm searching for something... I now understand that these were the times when I was straying most from my true path and I was down because I felt lost and alienated from my true self. Often at these times 'the guys' as I call them (i.e. the angels who watch over us on behalf of our higher selves) would introduce me to books. These books invariably had a powerful and/or positive message for me and I would always feel so much better after reading them. Let me give you a couple of examples...

The first of these as I began my awakening years was 'The Celestine Prophecy' by James Redfield which I was lead to by my friend 'Mikey' and read in 1996. This began to show how we can escape from the impacts of the negative parasitic types of energy - people steal from each other through their daily 'dramas' - by tapping into real energy in its positive universal form, and following the messages and signs presented to us through intuitiive feelings of 'coincidence', 'deja vu' and 'familiarity' i.e. synchronicity

And, 'The Robots' Rebellion' by David Icke which was literally presented to me one day early in 1999.

I was in a bookshop with my cousin 'Nel' who was visiting for a few days. My mum died on Valentines Day. I'd been drawn many times to the books of David Icke but was still 'stuck in the matrix' and to be honest was worried at the time that people would think I was mad buying one of his books. It's hard to believe I ever felt like that now but I can remember at the time browsing the table in the 'mind body & spirit' section and being fascinated by the cover of 'The Biggest Secret' which had just come out, but picking it up and putting it down again. Nel meantime was at the shelves and completely independently of me picked up 'The Robots' Rebellion' and read the synopsis. I took that as a sign and bought it straight away, and of course as soon as I'd read it went back to the shop and bought 'The Biggest Secret', and after that every other book David as written, I just couldn't get enough!

At last, here was someone who began to explain our crazy world and why I felt so alienated within it. 1999 was another big year, a couple of months after first reading 'The Robots' Rebellion' I went to see 'The Matrix' with my son Chris and things were never the same again - Halleluja!

So, I wrote this little tune in honour of Books, still for me by far the best form of in depth communication we have ever come across

Which books have been most important to you?