Shut Up & Skin Up

(Recorded DI through the amp at The Groove House)

All day, I have been driving all day

And all night, Now I need a little respite

You have been gassin' all night

Spoutin' a right load of shite!

But I will forgive you alright

If you shut up and skin up

Shut up and skin up, skin up for me

I need some more THC

To save me from my reverie

And if you care anything for me

You'll shut up and skin up

I'm so tired, I need an illusion inspired

I'm so drained, Please help me out of my brain

There is between us a rift

But I'll say to you "Astablift"

If you roll me a fuckin' great spliff

If you shut up and skin up

Yeah I need some more THC

To save me from my reverie

And if you care anything for me

You'll shut up and skin up

Skin up for me 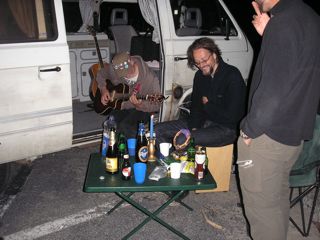 This is one of a batch of four songs I came up with while I was on a road trip in June 2010 with a couple of mates. I'd been driving all the previous day, having come straight from a 3 day appearance at the Sunrise Festival, picked up my mates and headed to Dover for an overnight ferry. We had got to a beach on the Belgian coast in the early hours of the morning straight off the ferry and had been hanging out there all day

Later that evening we were jammin some tunes and having a drink and a smoke but I was pretty tired. All I wanted was a nice little smoke from my mate to keep the night rolling along but he was acting more like he was speeding! He just wouldn't shut up gassin and roll so I started singing this phrase to him over and over again whilst strummin an A minor chord. Luckily it worked as we all burst out laughing and he finally took the hint and produced the goods!

After that, if I was ever 'round a camp fire and hoping for a little toke this tune usually got an airing, hopefully without me gettin' a clout but instead having my request fulfilled without too much delay...

The other songs of that batch were: Take Off Your Shoes And Open My Beer, It Don't Take Much and Three On Two.