You're trying to be like, what they want you to be

You're trying to give the time, the time they want you to give

You're trying to live the life, the life they want you to live

But I can see the way, the way you're feeling today

And there's no way

The you that you used to be

You're trying to make me another version of you

You're hoping that you'll feel better if I'm a hypocrite too

You're preaching your gospel, the one they taught you to read

But it's dodgy not holy ground, when you don't really believe

And I can hear the words, the words that sound so absurd

Coming from you, the you that I knew

The you that you used to be

Adrian said you have to

Watch where you tread

'Cause you see a space on the tree

The me that I know I can be

And so you see 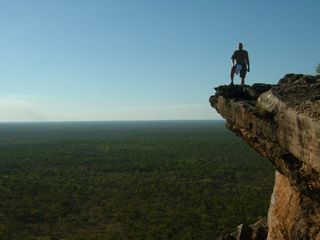 A tongue in cheek song for an old mate of mine (the 'Dave' mentioned in the lyrics) about our old boss (Before I quit work and ended up on this cliff top in Australia of course!).

Sometimes when one of a gang of work mates gets seriously promoted the ones they 'leave behind' end up bitching about them, because inevitably they change somewhat as they move up the ladder, at least from the perspective of their perhaps jealous former peers! It can seem like they're not the same guy they used to be, like they're trying to be something they're not to fulfil what's expected of them in their new role.

This is a kind of 'gossip at the water cooler' skit (see the movie 'Office Space') where your old poacher mate is now your game-keeper boss, but of course you are still your authentic self and would never dream of selling out! Just trying to be the same old me I've always been ;)