Drums by Erbish AKA 'Dirk The Drummer'

Migrating from GooTube to BitChute - video will be uploaded asap

Audio only below - from the same gig

You have a gift, that’s given to you, and

That is the thing that comes natural to you, and

That is the thing that you came here to do

So don’t waste your time, on things that aren’t real, 'cause

All those other things won’t have the same feel, and

All those pretty things soon loose their appeal, so

This is your call, can you hear it?

This is your call, and it

Wake from your sleep, and live what you dream, then

You’re on your way to a much better place, where

No other day will be one you can’t face, so

This is your call, can you hear it?

This is your call, and it

Won’t go away, are you listening today?, 'cause

Of the one who can say

The Story of 'Your Call' 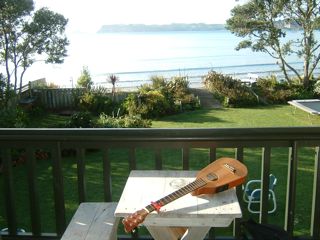 This is quite a long story but it inspired this song so here goes...

I left "employment" April 2004 and went traveling with my son Chris. I only intended to be away for a while and then start life as an energy consultant (yawn...). But a series of bizarre coincidences changed all my plans and led to me following my 'calling'. If you've ever read "The Celestine Prophecy" you will relate to the story below...

Two days after leaving "employment" I got on a plane with my son and flew to Thailand, intending to chill out and see a new bit of the world for a while. I was in an Internet cafe on the beach on a little island called Ko Samet when I received an email asking me to go and present at a conference in New Zealand. In my last job I'd worked on bringing a unique new "green" energy product to market, manufactured by a company in Christchurch. So, instead of returning to Britain I travelled on to NZ and arrived in their winter in June.

I flew into Auckland and decided to visit the 'Sky Tower', where I was sitting reading a Noam Chomsky book in the coffee shop when a lady walked in and sat nearby. I had a really strong feeling that I should talk to this lady but felt a bit self conscious at the time and then got lost in my book and forgot about it when she left.

Later that evening I decided to go back to the tower to have dinner in the revolving restaurant and who should the waiter sit me down right next to? Yes, the lady I'd seen earlier! This time I listened to my little voice and told her that I'd seen her earlier in the day and that I had had a strong urge to talk to her (and hoped she didn't think I was a weirdo or something) at which she told me her name was Zoe and invited me to join her and her husband (Levi) on their table 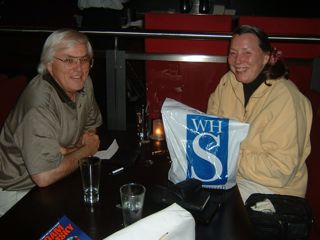 We got chatting and it turned out that Levi had also worked in the energy industry (in Dallas, where my former company's HQ had been) but had retired early due to the stress. He and Zoe, who was a published psychologist in the U.S.!, had sold their house and gone traveling and that had been three and a half years previously. They were having a ball!

Then Zoe asked me what I was doing and what my future plans were. I explained the consultancy idea, obviously exhibiting negative body language at which she interrupted, looked me straight in the face and demanded "...Okay but what do you REALLY want to do with your life...?" I replied that I'd really like to be a traveling musician BUT (and here's were all our excuses come in because we've been conditioned to be afraid of stepping outside the norm) BUT I have a house and a big mortgage and the kids to look after and the bills to pay and credit card debt etc etc etc ...

"...Well, why don't you sell your house like we did, clear everything and then when the kids are old enough you can go traveling and be a muso BUM!.." says psychologist Zoe.

It had never occurred to me to sell the house, because again I think we are conditioned to believe that bricks and mortar and a pension is why we work in the first place so we can have 'somewhere nice when we retire'

I got really excited at this thought of selling up however and that night went back to my room and was up till 6 a.m. working all the numbers out! Safe to say that's what I eventually did once I got back home but first I drove out to the Coromandel Peninsular and got a room in a little motel in 'Mercury Bay' (the photo at the top of the page) where I wrote this song 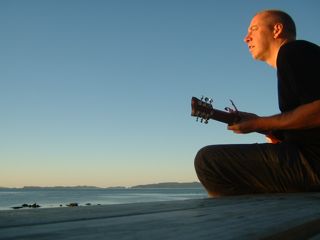 I really do believe that we're all given certain gifts, but most importantly a special talent that comes naturally to us and that is the thing that we came here to do, our 'calling' in life. These coincidental events which led to this change in thought and attitude was a major turning point for me and put me on my path to being what I really am, and towards becoming 'A Freeman'. Look for the signs in life and follow your heart and your little voice and then, in my experience at least, everything will turn out for the best

Hope you enjoy the tune...