Get a PDF of the Lyrics

A time of ignorance, war and rage

We've been trapped in a cage

But now we're turning the page

And as we find each clue the ancients drew

We're coming out of the haze

And as we find the proof and share the truth

Our time is in a revolution

Never linear in its evolution

Our consciousness will raise

As we bathe in the cosmic rays

Throughout the bronzing days

As we find a way through the maze

And though our human race was lost in space

We're coming out of the haze

And as we find the clues let's spread the news

So smell the air of spring

In the light of the silvering

When songs the stars will bring

Of elevation for us to sing

Through structures from the past they built to last

And so we humbly praise those of those days

The days of the Golden Age

The Story of 'The Golden Age' 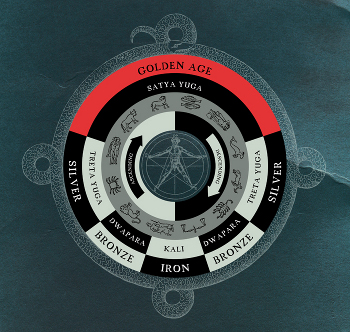 This song is inspired by my voyage of discovery about what Plato termed 'The Great Year', what the Hindus call 'The Yuga Cycle' but what western science merely refers to as 'The Precession of the Equinox'. I became fascinated by this subject when developing the 'Universal Celestial Calendar' (UCC). In particular when we consider what the true 'common era' year actually is (I mean, it's certainly not really only 2013 is it!), the precession cycle is a very useful clock.

Precession was not a new concept to me, I first became aware of the significance of the cycle several years ago reading Graham Hancock's excellent book 'Heaven's Mirror'.  However at that time the cause of precession was attributed to the wobble of the earth's axis due to "lunisolar" affects. This is still the accepted mainstream theory today, although it is referred to as if it is proven scientific fact, mainly it seems because the theory was put forward by Newton!

However there is a much older explanation from the Hindus, especially Sri Yukteswar Giri in his 1894 book 'The Holy Science' (which I was tipped off about by Michael of Bernicia). Here he explains the ancient knowledge that our sun has a binary star and that it is the orbits of these two stars around each other, once every 24,000 years which causes precession. He also outlines how this motion leads to the rise and fall of our levels of consciousness over the 24,000 year cycle.

This whole topic is outlined very well by Walter Cruttenden in his recent book 'Lost Star' (a highly recommended read!).He also made the 'Great Year' documentary which you can see below

We are currently (as of writing this song) in year 13,513 of the 24,000 year cycle, starting from the peak of the last Golden Age, so this is the year I used for our new Calendar (detailed Wiki here). But anyway, whatever the cause of precession turns out to be proven to be, the main point regarding my song here is that I find the concept of a returning Golden Age very uplifting. It resonates with me with an awareness of forgotten truth and scientifically explains how ancient peoples could have accomplished the amazing things they did. I mean, are we really expected to believe that construction of the enormous number of massive ancient megaliths was achieved with slaves, donkeys and logs of wood??

I certainly feel in my heart that we are spinning back towards The Golden Age, and I hope my song and this story stimulate you enough to do your own research into this fascinating topic