Joining me on Lead Guitar & Vocals are:

See the past hanging on your wall

Who's it for? Not for me no more

Collect the dust between your ears

It's in your head, so why the cardboard box beneath your bed?

Dreaming on that one day soon

You'll have time to watch this room

Let it go and memories will do!

The only tape you haven't got

Is 'Hector's House' or maybe not

Out in the pond there's a real frog and fish

Your 'life' is piled around you all the corners packed

But it's all memorabilia it's not real at all

Sell it off, let it go

Stop it now, Hector! No!

What the hell, you'll never know what's there

And why should you care?

So lay it bare

Hector do you dare?

You'll never know what was there

And why should you care?

Cos you were there!

The Story of 'Hector' 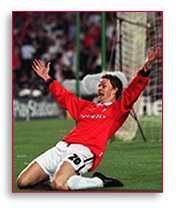 Ole seals the treble in 1999 Gregorian for Man United

The footage of this was just one of the many videos and DVD's that used to be in my Hectory collection!

This is a lament to collecting stuff (especially souvenirs from events you were actually at) and a small homage to a favourite kids programme of my childhood, "Hector's House". We rarely if ever got to see inside Hector's House, but if he was a 'Hector the Collector', as I was up until the time I wrote this tune, it would have been stacked to the brim with records, tapes, cd's, video's, magazine's, football programmes and all the rest of the stuff some of us tend to collect during our lifetimes.

Writing this tune helped me purge most of my "Hectorism", I sold all my vinyl to a second hand record store at about this time. I remember leaving the shop with £90 cash and feeling pretty chuffed (who knows how much I'd actually spent on all the shite in the first place!!) but then promptly backed my car into a lamp post in the car park. I drove home to call the company about the repair (it was a company car) but then left my house keys inside the house whilst we went off to the flix to see a movie. Of course, on arriving home later we were locked out and had to call out a lock-smith to get us back in. Guess how much he charged me? Yep, exactly £90!

Anyway, I'm glad I don't have all that stuff any more, now I mostly try to live in the moment and just collect happy memories... until recently I sometimes plugged back into 'The Matrix' to watch Man Utd collect trophies but then Alex Ferguson retired so I did too