No Tax For War

Went marching on a demo down in London

Must have been about a million people or two

All carrying a load of banners and slogans

And all shouting “Hey we know what you're planning to do!”

But we ain't had a referendum

And you weren't elected for this

And using tax for attacks on Iraq is just taking the piss!

And so I'm telling you

No tax for war

You can stick y' tax up y' cracks you government whores

'Cause the debt is what you're fighting for boys

So I ain't paying no more

But in they went to find the “weapons of mass destruction”

But everybody knew their story was falling apart

It's been illegally a military occupation

Oh yeah they “murdered him in Pakistan” (Yeah right!)

But the C.I.A were funding him as a U.S Government Bogey Man!

And so I'm telling you

Got stopped by a cop called Phil one Sunday

So I showed him my M.O.T and insurance

And the notice that I sent to the D.V.L.A

'Cause the government's slaughter's illegal

So paying tax is against the law

So I ain't giving you

Gonna stick my cash in a stash under the floor

'Cause the debt is what you're fighting for boys

So I ain't paying no more

I said the debt is what you're fighting for boys

And Her Majesty's a Rothschild whore!

Yeah the debt is what you're fighting for boys

(Migrating from GooTube to BitChute - video will be uploaded asap)

The Story of 'No Tax For War' 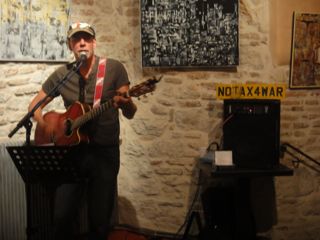 I wrote this song after I'd stopped paying tax because of our governments' illegal wars in Iraq and Afghanistan.

If you visit the 'Project Freeman - Peaceful Rebellion' pages you will see that I got into the whole 'Freeman' idea as a way to protest against our corrupt governments and how they use our tax for things many of us do not agree with, such as war and bailing out the already massively wealthy banks

Once you do the research you realise that withholding tax is actually an obligation we have and an act of "civil obedience" (under the statute legal system, if you're still a part of it) and the best way we can help to stop the atrocities that are funded by our tax money