Artwork by Litmus A Freeman

Performed by Litmus A Freeman (acoustic & electric rhythm & lead guitars and vocals) with...

Mixed and Mastered by Alexandre Picinni**

**Note: the participation of my fellow artists in the production of this work should not be taken to mean that they necessarily agree with the political stance expressed in the lyrics or artwork.

Car bomb chaos on the streets and TV screens

Every where the Empire’s been

Deja Vu I’m sure I’ve seen this all before

A trail of terror in our wake

Evolution says you learn from your mistakes

But this is no mistake

'Cause we're all part of one big plan

Ever since the fall of man

Space invaders rule the world are you tuned in

To the way it's always been?

And trivia distracts you from the scene and the question why?

If you don't read just look outside your door

Aggressor is the name for those that start the fuckin' war

*{And “Holy Words” from Hollywood promote the beast

And terrorise the middle east

They came from there, now they’re on Sky & CNN

It's the same same, but different

Yeah it's the same same, but different

Yeah it's the same same, but different

*{shorter version does not contain this verse}*

(Migrating from GooTube to BitChute - video will be uploaded asap)

*{shorter Tuscan Raiders version does not contain the last verse}*

The Story of 'Same Same' 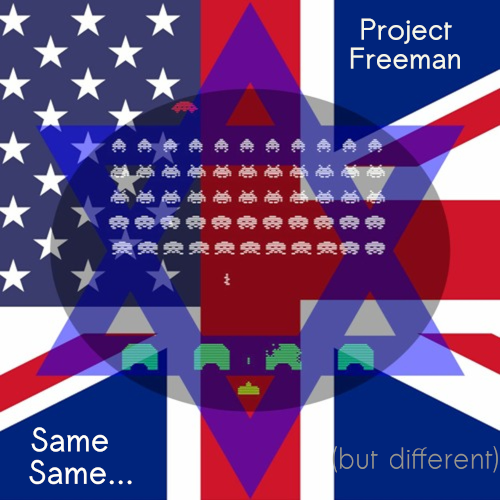 This one is very much inspired by the fantastic work of David Icke, who's books I have been an avid reader of since I began to "wake up" in the mid '90's. I also spent a lot of time in Thailand when I was travelling, post employment, and liked the "same same but different" phrase the Thai's use 'cause they don't have a direct translation for the English 'similar'.

It occurred to me that the way the imperial history of the European (Babylonian) aristocracy has repeated itself as they spread their evil across the globe was very much 'same same' and is by no means an accident or coincidence... in fact if you do the research you will see that it's very much "part of one big plan, ever since the fall of man"

This is particularly the case it seems with the old red, white and blue axis of evil, with the "UK" & "US" (and France) at the hands of their Zionist infiltrators