Recorded on a Fostex 8 Track Reel to Reel (1995 Gregorian)

We're denied and deprived of the thoughts in our fantasies

You can see us walking to work every day

In the sunshine, wishing the days away

Spend their time in 'The Times' hanging 'round on the underground

We spend years learning to be what we're not, and never sure

How to fit the profile that they're looking for

We turn up and try, in a shirt and a tie

While the part of us that we hide deep inside

To be you, just to do, what you like (and what you're good at too)

And to use the other side of your brain

And to leave, a part of your soul, behind in your name

There's a reason we dream, make the most of the Waking Hours

We dream to make the most of the Waking Hours

Make the most of the Waking Hours

The Story of 'The Waking Hours' 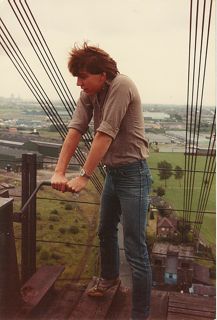 Sitting in a dull, stuffy office on a beautiful summer's day is enough to depress anyone. That's where I found myself one day in 1995 having been to the pub over lunch with my old mate Cliff (actually the first of the words came to me sitting on the loo!!). It was one of the first times I really started to question what the hell I was doing wasting my life in the corporate world. Most days it certainly felt like trying to turn a big mill by hand...

Make the most of your Waking Hours...