Recorded live in one take with 'The SubTles' featuring, in addition to my Vocal & Rhythm Acoustic Guitar... 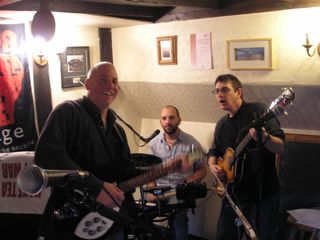 It was a Thursday night, I was with me mate Huw in Manchester after a gig

Went to a bar, it wasn’t a re-ale one I 'recon it was plated with gold

Why’s that you ask? Well it was Seven Pound Forty for two pints of “lagery” beer

And there he was, he was sitting right in front of the duo from the musical school

“Hey I could sing a song” he bragged

“My mates will sing along” he nagged

I asked the guys if they could do some 'Crowdies', we'd just seen 'em at the M.E.N

“But it’s their 1st gig” I said “They’re students from the music school, the girl works here behind the bar

“But I could show them how, it’s done” says John

“My mates are looking now ‘n I’m the one”

“Because I’m Wannabe John, I’m sitting here waiting so I can show off, did I say?

That I’m in a band, you must have heard of us, we’re really big round your way”

I snuck away, and rejoined the conversation with a couple and me mate at the bar

“We’ve played near you” he says,

“Can’t say I have” says Huw

He says “I’m Wannabe John, I’m sitting here waiting so I can show off, did I say?

That I’m in a band, you must have heard of us 'cause we’re really big round your way”

He says “I’m Wannabe John, and I love to have everyone’s attention on me

What this really hides, actually, is my deeper insecurity”

He said “I’m Wannabe John, nobody’s heard of me but that doesn’t matter to me

love of the parental variety

Maybe I should get some therapy...

The Story of 'Wannabe John' 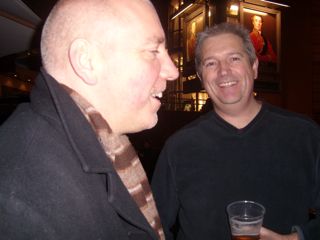 Me and "...me mate Huw in Manchester..." on the night in question

I went to see Crowded House in Manchester with me mate Huw and after the gig we went for a few more beers, having had good well priced ale at a 'proper' pub beforehand. Sadly, Huw dragged me to one of those bloody 'Slug & Lettuce' type places full of posers and overpriced "lagery beer". However it was worth it in the end to get this tune out of the experience...

The lyrics are pretty much exactly what happened when we got there and met 'Wannabe John' himself. And of course there's a certain amount of self parody having been just like 'Wannabe' myself in the past

Having 'The SubTles' around was great as it meant that this song must have experienced the shortest time between writing and recording of any of my songs ever, just a few days