All those people who died in a war

Are you really sure what they died for?

Fighting their fellows for some king or queen

And DEBT for the money-men behind the scenes

We're told they are heroes so we can be free

To pay for a passport to cross overseas

And gone are the days when the king took the lead

The politic realise they've no need to bleed

And many a poor soldier thinks he's noble indeed

But he commits murder for money-men's greed

And all the blood shed in the name of the queen

Means war's a big business to feed the machine

With the War Dead...

When the bankers took everything off our bottom line

And the debt gets a boost every seventy years

So each generation's presented new fears

Last time they called it 'The Second World War'

This time a 'Credit Crunch', more tax on the poor

So what in two thousand and seventy nine

Will be their excuse to add to their crime?

But still you keep working to fill some more graves

'cause the fruit of our labour is death overseas

While we eat our pizza's and watch our T.V.'s

Our tax is the fuel for those fires abroad

And all of our “protests” will all be ignored

While some poor “Western” teenager 'saved' from the dole

Gets paid Sixteen Grand to raise the “Eastern” death toll

And fight in a hole, or die on patrol

Through this fear they control and like slaves we are sold

The lies we are told, and who of us knows

How far back it goes

As the debt grows and grows

For the wars we oppose,

As our conscience bellows

The all seeing eye glows...

The Story of 'The War Dead' 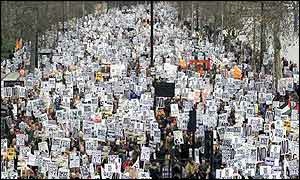 This one comes out of the frustration of going on marches and demonstrations, with many thousands or even millions of others, such as the one against the invasion of Iraq in 2003 Gregorian (pictured above) only to have them completely ignored by the government. But then it is "Her Majesty's Government" after all, not ours, so I guess it's no surprise seeing as how it was 'Her Maj' who signed off the executive order to go to war in the first place.

I soon realised, having done many hours of 'Freeman' and associated research that the system loves war as it ticks so many boxes for those that benefit from and control that system.

There really is no point in protesting by going on marches, in fact the system loves that too! (To see why click here)

Think about it.... do you really want to be responsible for adding to 'The War Dead'