Recorded by Miguel Simoes at Under The Stage Studios

(or one of the other major music platforms above)

I never knew much about Badgers at all,

except they were white with black hair and they weren’t very tall,

or there again very small

They live in sets and they fall into traps,

we live in houses and fill them with souvenir scraps,

to fill our life gaps

Ooo... if Badger had eyes they would be big and beautiful too

and my summer silence would be shattered in two

And I don’t know anywhere I’d rather be,

I love to sit here and play my guitar to the trees,

and wish you were with me

Compare you to Badger is something I’ve done,

In the Orwellian sun

But sometimes I worry

that there’s somewhere that I’m supposed to be

or something I’m supposed to do

And then I remember

that I’m not part of that any more

And the river’s just outside my door

So, am I singing of Badger or you?

Maybe one day we will all be inseparable, two?

But I’m learning lessons in carried away,

And badger I’m overboard inside but outside today

A view of calm I’ll portray

Ooo... the first time I saw you I thought we'd be good for each other

And the moonlight would look good on you

Ooo... the next time I saw you I knew we would be good together

(Recorded DI through the amp at 'The Groove House')

(Migrating from GooTube to BitChute - video to be uploaded)

The Story of 'Badger' 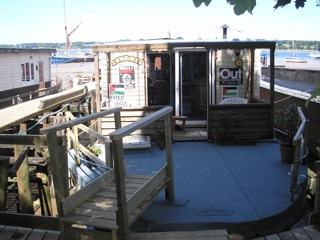 Okay, this is a pretty long story! Badger is a great little houseboat that I used to live on. The universe brought me and Badger together via a series of amazing coincidences (well I think so anyway!). It was another "Celestine Prophecy" tale for me... hope you like the tune, and the story of how it came about...

A friend of mine (Lou Lou) got in touch one day in the autumn of 2005 Gregorian and said she was coming back to town for a party at a mate's place, so I went along and we all had a great laugh and sang some songs 'n stuff.

I stayed the night and next morning called a cab to get home. The cabbie, who was called Terry (No.1), picked me up and we got chatting about the usual stuff, during which I asked him where he lived and he told me he was living in the Marina. "Bloody hell, you're doing all right for a cabbie then" says I, 'cause those places were a lot of money even then. "Ah no" he says "I live on my boat, in the marina". He went on to tell me what a great deal it was and it got me to remembering that when I was a kid I often day-dreamed about one day living either in a Light-house, a Windmill or a Houseboat (I used to like this programme called "Shoestring" about this detective guy, played by Trevor Eve, who lived on a narrow-boat in Bristol). So, I started to think about getting a houseboat, as even then I was looking for something cheap I could buy so I wouldn't have to pay rent or mortgage to anyone. I visited the marina's and sussed out all the prices and options, but nothing was available at the time...

A few months later I sold my house (see 'Your Call') and started renting a place near my lads school. Then during the winter (Jan 2006) I got an invite to the opening of a new music shop and headed off as requested to check it out. On the way I called in to another mate's music shop for a chat about something or other, and while we were chatting he told me he was going fishing in Scotland and that he loved boats. "Talking of boats" says I, "I'm thinking about getting a houseboat to live on". "Oh really" he says "I know a guy, a bass player called Terry, who's lived on a houseboat for about 7 years, but I think he might have sold it recently". "Can you get in touch with him and find out" I asked. "OK" he says, "but I don't have his number, and I haven't seen him for about 6 months" at which point the door to the shop opens and in walks this guy... "Bloody Hell, I don't believe it, that's Terry now!" says Brian

I couldn't believe it either! So, of course, I got chatting to Terry (No.2) and it turned out that he'd sold his houseboat on the very same day I'd previously sold my house, which was also my brother's birthday! I was initially gutted that I'd missed an opportunity, but he told me not to worry as he didn't think the guy he'd sold it to was very happy there and may want to sell on.

I shot straight down there and put my number in the door of the boat, and sure enough a couple of days later I got a call from the guy and went to have a look. I liked it straight away, although it needed a bit of tartin' up, but mostly I loved where it was, on the river, in the forest, right near a pub! I took my lad back to make sure he liked it too - and told him he could have the biggest bedroom as a sales pitch - and he did, so I said I was interested and that I'd give him what he paid for it. We agreed terms and I did all the paperwork myself - no agents or solicitors - the best drummer in the world witnessed the deal (cheers Erbish) and about 5 weeks later the boat was mine!

The boat was called Badger (because it was black on the bottom and white on the top), and I spent a happy month before we moved in getting her/him "ship-shape". I found a favourite spot to play my guitar (to the trees) on a couch in one corner and one day this little tune came to me after I'd been messin' around with my tunings, as advised by my son Thom, to have a go at a Jose Gonzales song. There were several lovely women in my life at the time, one of whom was a girl I really liked who had dark hair and pale skin, and was quite short, so I began comparing my affection for my new, very fortuitous, home with the feelings I had for this girl, but for various reasons (excuses!) at that time I just wasn't very confident about telling people how I really felt about them (now much better) so I never told her. "...If only you knew..."

So, this tune could be in the 'Romance/Relating' category but when I sing it I think more of Badger and how we found each other, which was definitely a big part of my 'Remedy' on the 'Road to Redemption'.

'Badger' has since become the song I get asked to play most by those who have heard it. I hope you like it too... and follow those "coincidences" in your life, you never know what might come your way if you do!