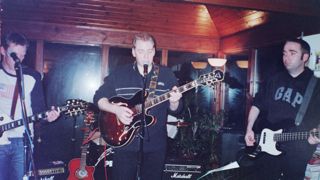 and behind me is Neil Diplock R.I.P (Drums)

The name 'Vacant Lot' came from what my ex wife used to say when she invaded our practice room and saw us 'lost in music'. Apparently we looked "...like a right vacant lot...". We didn't have a drummer so I did my best to programme my Roland drum machine to fill in! And I was still quite shy about my voice at this point (these days I don't give a f**k!) hence the rather subdued vocals. But the 3 of us went on to form Tuscan Raiders (via an outing for a while as 'Spontin') and redid some of these songs, some might say a vacant lot better in that guise ;)

(My production. Written by me and/or Hynesie^)